You probably noticed that some of the biggest brands and advertisers didn’t have commercials during this year’s SuperBowl. Coca-Cola, Planter’s, Budweiser, Avocados from Mexico, and Hyanudi are some of the major advertisers that decided to sit out of the game. Instead, some companies and brands decided to redirect their advertising funds to raise awareness for COVID vaccines or to help others that are making an impact by doing good deeds.

With some of the big names out of the game, many companies had the opportunity to debut their first-ever SuperBowl spots. Some of these companies included UberEats, Robinhood, DraftKings, DoorDash, Chipotle, Hellmann’s Mayo, Mercari, Huggies, and Vroom

The USA Today Ad Meter rated 57 commercials and the results are in. The panel ranked both of the Rocket Mortgage spots as the best commercials of the Super Bowl. The last time that one brand held the top-two spots was 2007.

The Rocket Mortgage commercials were followed by “Alexa’s Body” from Amazon in third place and “Come Together” by M&M’s in fourth place.

We decided to rate some of the commercials for ourselves.

As promised, here were some of our favorites!

Jeremy: Before I dive a bit deeper into my favorite commercial, I wanted to discuss some of the ones that Abby and I loved and others that we didn’t like as much.

My personal favorite was from Jeep. I read a lot of reviews and feedback from people that didn’t really like the commercial. In my opinion, it hit the mark.

In his Inaugural speech, the President of the United States talked about how he wants everyone coming together, no matter what political party you belong to, in order to reunite the United States. I actually think that the Jeep commercial pushed that message perfectly with the idea of reuniting the country. Based on the culture in which the President has set and wants to work towards, I think this company portrayed that perfectly. The commercial provided a place of hope and common ground. No matter your race, your gender, or your beliefs, we’re all people that need to come together. The imagery was beautiful, I think the message was compelling, they used a popular singer, and I loved it. I think it hit the mark on all levels.

I invite people to share their opinions, and I would love to understand the perspective of people who disagree with this ad or think it missed the mark.

Abby: My favorite commercial was Cheetos because I am a big fan of Mila Kunis and Ashton Kutcher. I like that his singing wasn’t polished, it made it more raw and personal. Also, who doesn’t love Shaggy? He has a unique sound and I love that he came up with a solid flow just for the commercial. Not all super bowl commercials incorporate the product or even much about the brand – it’s more about the attention but this one captured the brand and product in a cute and fun way. I appreciate the light heartedness.

Avery: My favorite ad was Toyota, featuring the Paralympic swimmer, Jessica Long, with no legs. It brought tears to my eyes and the way they played out her whole life starting with her adoption was moving. Extremely moving and powerful.

Alexis: One of my favorite commercials was from Indeed. This has been such a tough time for jobs, whether you are new to the workforce or whether you have many years of experience. This commercial felt very real and authentic in relaying the struggle that many have experienced. It showcased a sense of hope and resiliency.

I think the song choice was perfect to go with the message. I just learned that the cover was by a 19-year old singer named Christian Shelton, who was discovered by posting cover songs on TikTok. He sang it so beautifully.

Even though they got some negative press from using the same stock content that was also used in another ad this year, I think it was very well done.

One of the things I really loved even more than the commercial was that the company turned to Twitter and took action. They created a thread during the game to post open job positions. 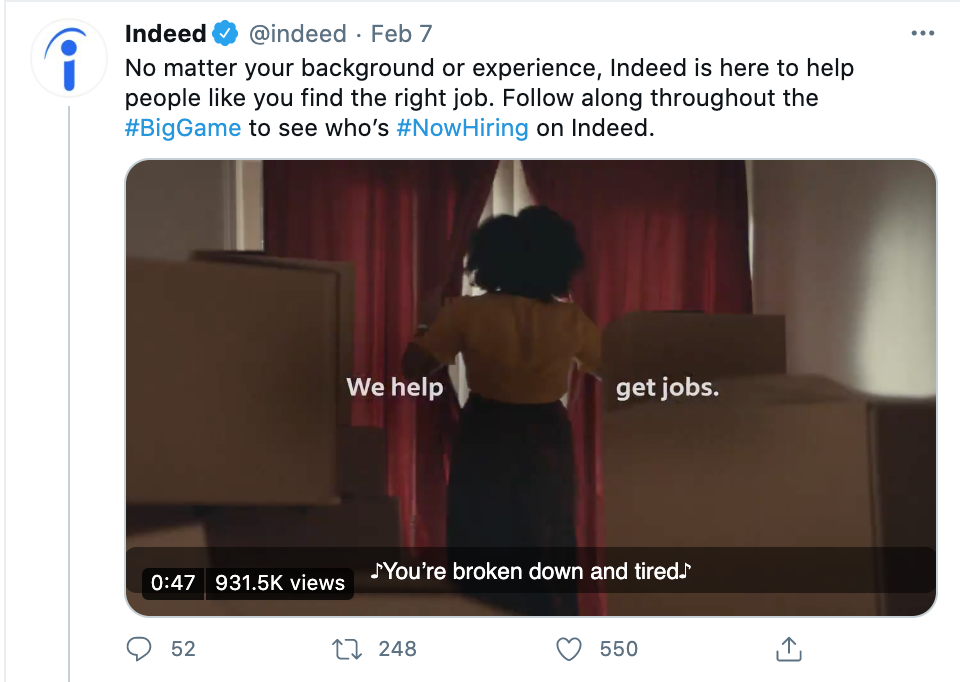 Now that we’ve shared our favorites and least favorites, we’d love to hear from you! What did you think of the commercials overall this year? Which ones really stood out, and which ones missed the mark for you?

View all posts by wholesomedia